By the time I returned home, it was late. I had five back to back classes as it was a Sunday. Children got more time in weekends to learn music and there were some special weekend classes too. It was good and enjoyed some classes but it wasn’t any less tiring. My hands hurt and eyes blurred and all I wished is a very good night sleep. As I parked my car in the basement, the watchman of our apartment came running towards me. There was a big box in his hand.

“Madamji.” He called me as usual.

“Courierwala  left a parcel for you.” He said flashing his tobacco stained teeth.

Parcel? I was surprised to see a parcel with my name to it. After my parents death I had no one who could have possibly send me a parcel. Forget about parcel, even a diwali wish from my relative was rare. All I had in my life were my students.

I took it from him and walked towards lift. I was tired to even say thank you to him.
Inside lift, I checked the parcel. It was a plain yellowish box with no fanciness on it. The address slip said it was from someone Swati, in Delhi.

Swati? Delhi? I entered into my apartment trying to remember any but nothing rang a bell.

I left it on sofa and went for a shower. After shower, I took a glass of juice and made lied comfortably on the couch tearing off the thick from the parcel.

A letter fell into my lap as the front was tore and another wrapped box was in there. I held out the letter to read properly.

How are you? I hope you are fine there. Can you recognize me? I can’t blame if you can’t as it is been long eighteen years since the last time we met. Eighteen years agone, we were in same class and sat on same bench. We shared our lunch and whispered secrets to each other. We were good friends then. Then my father transferred, we shifted to another town and eventually we lost contact. Now I guess you can remember me.

It’s strange to write someone all of sudden after so many years. May be I wouldn’t have written you now too. But there is something I had to tell you and I couldn’t bear the burden anymore. So listen and if possible please let your heart take the decision.

Eight years before my father got very ill and wanted me to marry before he leaves the world. I had no choice but marry the guy he chose for me. I didn’t know then but now I realize how lucky I am to have Abhay as my life partner. He took care of me when my father died six months later. He loved, cared and fulfilled every wish of mine like no one ever could have. Now I have a six year old son now. His name is Akhil. I must have done some good deed to have a family like this. I feel really blessed. Everything seemed perfect till two days back.

Two days back something happened that made me realize that I have done some wrong too and if I don’t atone for it then it will loom over my perfect happiness. That day after Akhil returned from school and went for afternoon nap, I went to his room to take out the snacks box from his bag. It’s one of his bad habits. He always forgets tiffin box here and there. As I opened the bag, I found a golden prize-cup kept in his bag. I knew about the Junior Spelling-Bee competition that was held a week back in his school. Akhil was very excited about it. He prepared really well and participated in it but unfortunately came third. One of his friends came first and another guy from his senior class came second. The whole day he was very upset and refused to eat anything.

I thought he was a kid and would forget after a day or two. He got back to normal as I had thought. But that day when I found the prize from his bag that wasn’t surely his, I confronted him. After when I and Abhay threatened him to beat he confessed of stealing it from his friend who had scored the highest in that competition. He said his friend brought the prize to class everyday and showed it to everyone. In anger I slapped him hard. It was the first time I ever laid hand on him that harshly. The whole night I kept crying silently. Abhay tried to console me but tears didn’t oblige. I couldn’t speak the truth I had confided inside me and forgotten for these long years. But as they say truth can never be ignored and it came in circle through my son to me.

The same incident had happened twenty years ago. You remember about the solo song competition in school we both had participated in there. You came first and won everyone’s heart with your honeyed voice. You were the myna of our school and I was just a simple girl who was being ignored in shadow your talents. We were very good friends. But after you won the competition I started to feel jealousy for you and your popularity. I hated you being so happy over your success and the way your flaunted your prize to everyone. It was a small long statue like figure with a tiny bird on its head. You were happy and I was hurt seeing you happy. And one day, finally I stole it. Yes, it was me.

I remember how devastated you were over losing your beloved prize. You didn’t eat for two days. You didn’t speak to anyone. Till then I didn’t know you loved the prize so much. After seeing you hurt like that I wanted to return it to you. But my tiny heart wasn’t that brave. I was scared thinking what would you if you came to know I stole your prized possession. I didn’t tell anyone. A few days later we moved to another town and I brought it with me.

I kept it under my bed hidden in a box from everyone. Till my marriage it was there only and after that I forgot completely about it. But after this happened with Akhil, I realized that my sin is being fruit to my child which I can’t bear. So I had to confess it to you and ask your forgiveness.

I know, sorry is very little word for the amount of hurt you were due to me. Because of me, a little girl had cried day and night. And I can’t forgive myself unless you do. I am really very sorry, my friend. I was a child and impulsively did it but bigger blunder is that after realizing also I didn’t return it to you. So even bigger heartily sorry for it. It may seem little to you know but for me, it is a big burden and for this I am returning what was yours to you.

Love you despite everything or whatever your decision will be. I am sure you must have done very well with you life. You were a star. I hope and pray that you more success in your life and happiness may ushered into your life everyday. 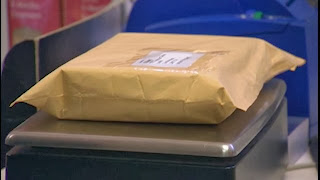 Excitedly I opened the second box, tearing it wildly with superhuman speed. Inside it, an old statue was securely packed with soft cottony cushion. I touched its fading surface careful as if it were some new born baby, lingering my finger at every bend on it. Happiness tided into eyes and streamed down cheeks. My childhood memory, the beautiful days all came to greet me. It felt like I was holding some nobel prize in my hand. The joy was unexplainably high. I held it chest and whispered,

“I forgive you, my friend.”

This post is a part of Write Over the Weekend, an initiative for Indian Bloggers by BlogAdda.