My first pet to my knowledge was a fish. As except me and my bother no one else at my home is so much interested in pet, so we bro n sis duo lost our fight for a dog. But finally with lots of arguments, hunger strikes and walkouts, we were allowed to have a pet with a strange condition. And the condition was the pet is not allowed to mooch around the whole house.
‘WHAT!’- This was my first response with disgust and also of my dumb brother. I tried to argue more, but it didn’t work. What is it? It means having a pet that won’t move at all? Are you guys’ nuts? How is it possible? I was too upset that’s when my witty mind finally worked. I got a pet. And that’s my fish.
You may be thinking I could have a bird in a nest but certainly and frankly speaking I don’t like to snitch someone’s free breath and shackle them for my amusement. Especially birds and I don’t the reason for my guilt feeling. Just it is not justified. They are also living being. How would we feel if someone had tied us like that to a pole every time and always make us follow their order. Our lives would become hell and we would be begging for death. So I’m strictly against all these.  Finally, I was left with this option only.
The very day I decided to do it.  I brightly remember, It was 30th December, 2010 night when I brought it home. I brought a baby tiny shiny gold fish with a pot. Right from then it became my roommate, the only listener and audience of demented ranting about others and all other crazy activities. I could have bought a big aquarium also. But I know myself and also know that what kind of a lazy buster I’m. So I preferred to bring a small pot of 20’’ radius containing about 20 liter water which was comfy dwelling of my baby fish.
I remember the moment when that lanky dark man handed me it in a thick polythene bag tightly knotted at the top. It was really cute whirling inside pouting out tiny bubbles and I was head over heel. Its best features were big long layered sparkling wings on its tail and galls. They were creating fine spectrum in the water under fluorescent light. The moment I saw the fish in pet shop, I was totally fetched to it. Somewhere it felt different from others. I brought it home with care more than the personnel might have put in carrying Kohinoor diamond.
I won’t say that it became attached to me in a minute and started playing with me. It took time to accommodate itself into its new glassy world and the environment of my cluttered room. I used to behold at it for hours. Sometimes I find it sad and filled with some loneliness, the same emptiness I do find in my heart. May be on later moments we became good friends though we are totally different creatures.
There were certain things that I noticed about it. The first thing, my fish was a big foodie like me. Instead of twice in a day I used to feed it for four times a day and that also twice of it’s recommended food amount. In music it loved soft rock (especially of linkin park and Enrique) and ‘eyes on fire’ of Twilight movie. We both used to dance together, both in different form that don’t match with any other existing form in the world.
Whenever I was going out for classes, work or hanging out, before stepping out I used to kiss the it at the glass of pot.  And when I was flicking on the light after a long time leaving it in dim lights, it used to stick to glass of pot, stare at me for while and then resume. I still can feel those deep dotted eyes looking at me.
But one day it also left me and it was my entire fault. It’s 9th February, a black day for me. The night before I fought at home over some silly matter, slept weeping and tensed. But among all these I forgot to feed it at night. When in morning I went to feed it, it was lying cold at the bottom of pot. I lost my senses for a while. Tears ran down cheeks. How cruel, careless and irresponsible I’m. I lost such a friend for my small forgetfulness. With a stone at heart, I buried its mortal body on the backyard, laid a stone on it and put some yellow marigold flowers that exactly matched its color.
I know it’s gone, no more here around me to swirl- to play- to listen me for long hours- to share my loneliness but it’s in my heart n it will remain always. You will always stay in heart, baby and I can’t ever forget you and our friendship. I wish you will forgive though I still feel guilty at my heart for such a fiendish heart. Just pray to the Almighty that your soul may rest in peace. 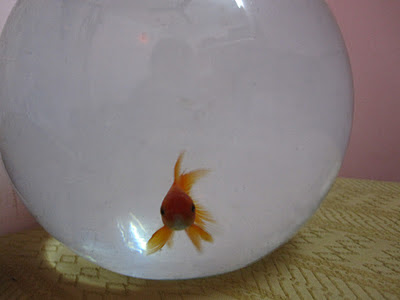 Mother comes home again. Yeah! I’m not talking about my momma but it’s about the momma of whole world. If you still scratching your head wondering who she is, then she is no one but Maa Durga, Goddess of energy and mother to all.      Dushehera is here again with lots of lights, fun and ten days of vacation. Dushehere or Durga puja (puja means worship and Durga is the Goddess who is worshipped on this occasion) is a Hindu festival mostly and widely celebrated on the eastern part of India. Now-a-days it’s widespread though and is celebrated abroad too. As my tiny town lies on the bed of Bay of Bengal, this is celebrated extravagantly through out the whole town for continuous ten days. May be this is one of a few festivals where the whole city gathers, bustled with crowd, hurly-burly winding city lanes bangs with noise. Ignoring race and religion everyone celebrates. Shop put up for discount sells. Children living away of their parents come home on vacation. It feels blissful even in the overpowering crowd.
In this occasion mother of Gods, Goddess Durga is worshipped. In our culture she is offered as the source of the whole universal energy. It may sound quirky and odd but on the tenth day we do worship our vehicles ( yeah! Vehicles. You got it right). We do wash the vehicles, knot a small red cloth around its neck and pray to the Goddess to save us from every evil-eye.
Except these, in this occasion many small and big idols of Maa Durga are put up on different places. (There are pictures below).  In the town like mine also has more thsn fifty statue (50!) statues consisting of small to enormous statues and all are very very pretty and eye-catching. I just love to wander around this time watching these. There are some idols so good that I couldn’t even take my eyes off them; wanted to stand like this forever letting those astounding arduous feats encroaching on my senses. Some idols describes love and care dripping radiant beauty of Maa Durga with hands seeming to nurture the world whereas some idols casts lights on the fiery furious side of  Goddess with truth and bravery flashing eyes and a courageous posture signifying good over ill. Apart from these, lots of eye-flashing decoration and many other small idols around the principal idol are set up to add glitz to it.
The best thing of this festival is that it brings lots of brotherhood and motherly care for everyone. It feels like there is a mothers hand around always holding us from falling. Whoever comes to her, she takes them into her shade of love irrelevant of their color and cast. Even the posture of Goddess Durga of tearing a diabolic monster under her feet with trishul(her weapon) itself manifests the victory of good over ill; Celebration of good over ill. This celebration has continued for hundreds of years and will continue like this forever. 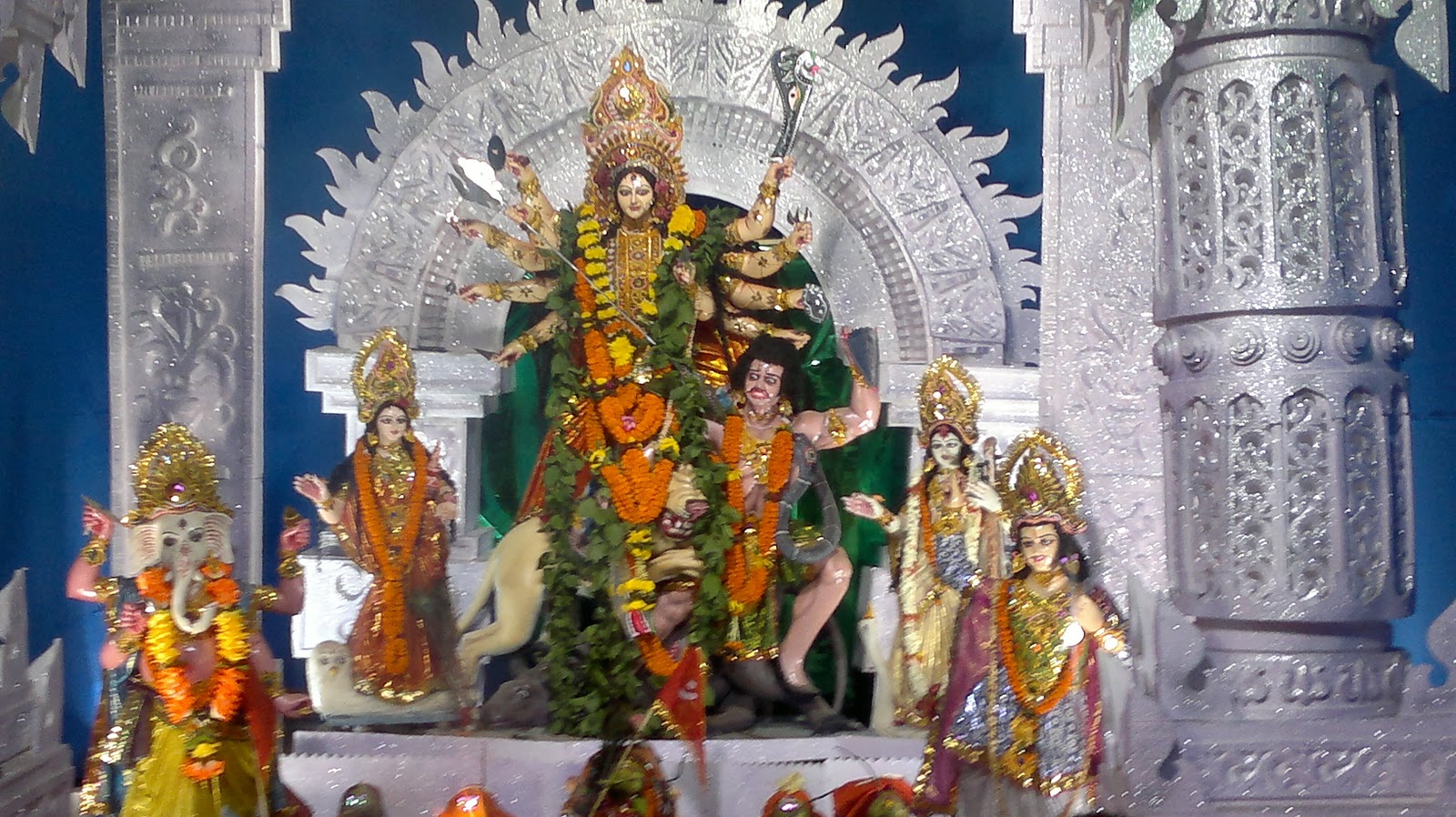 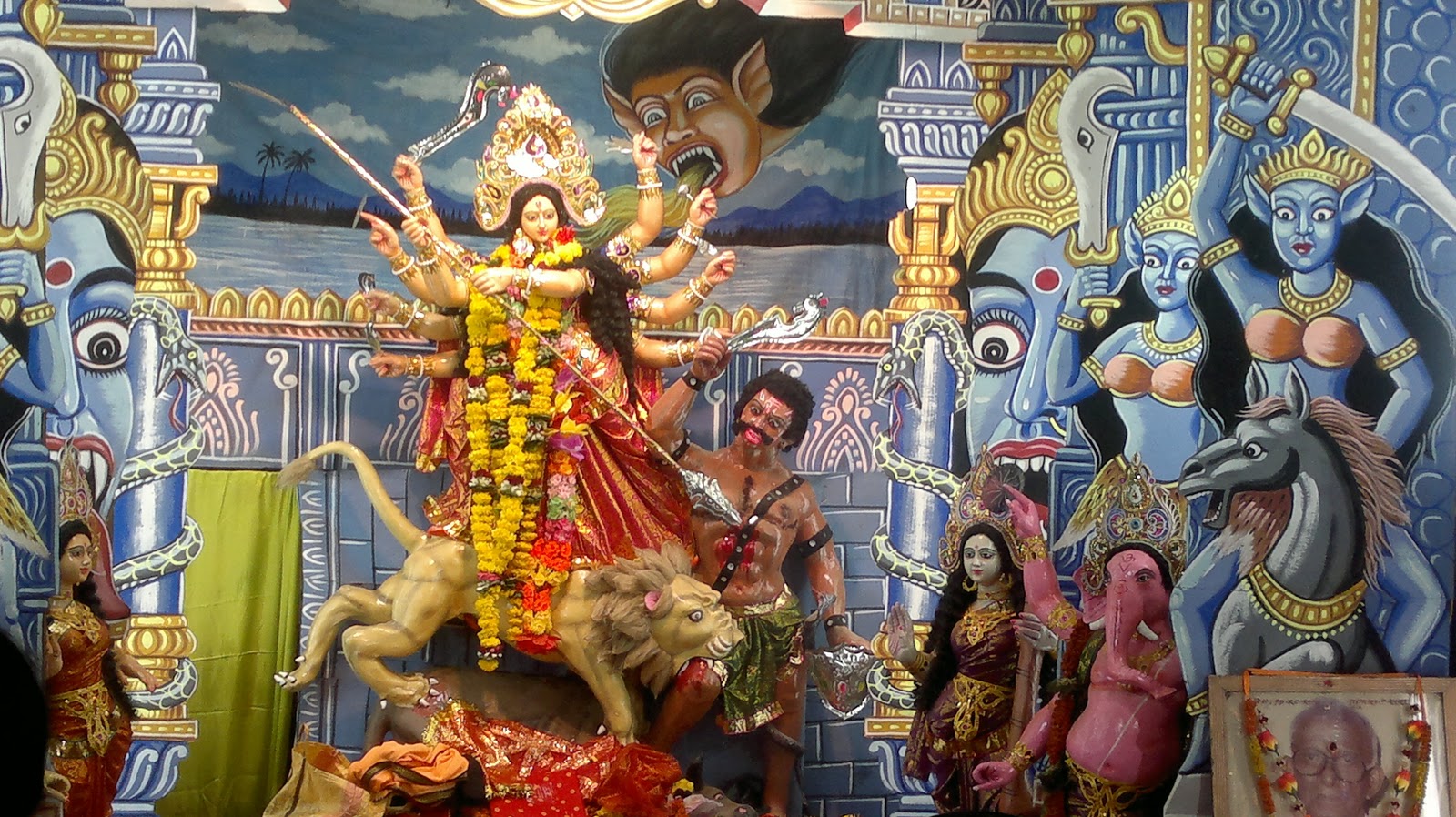 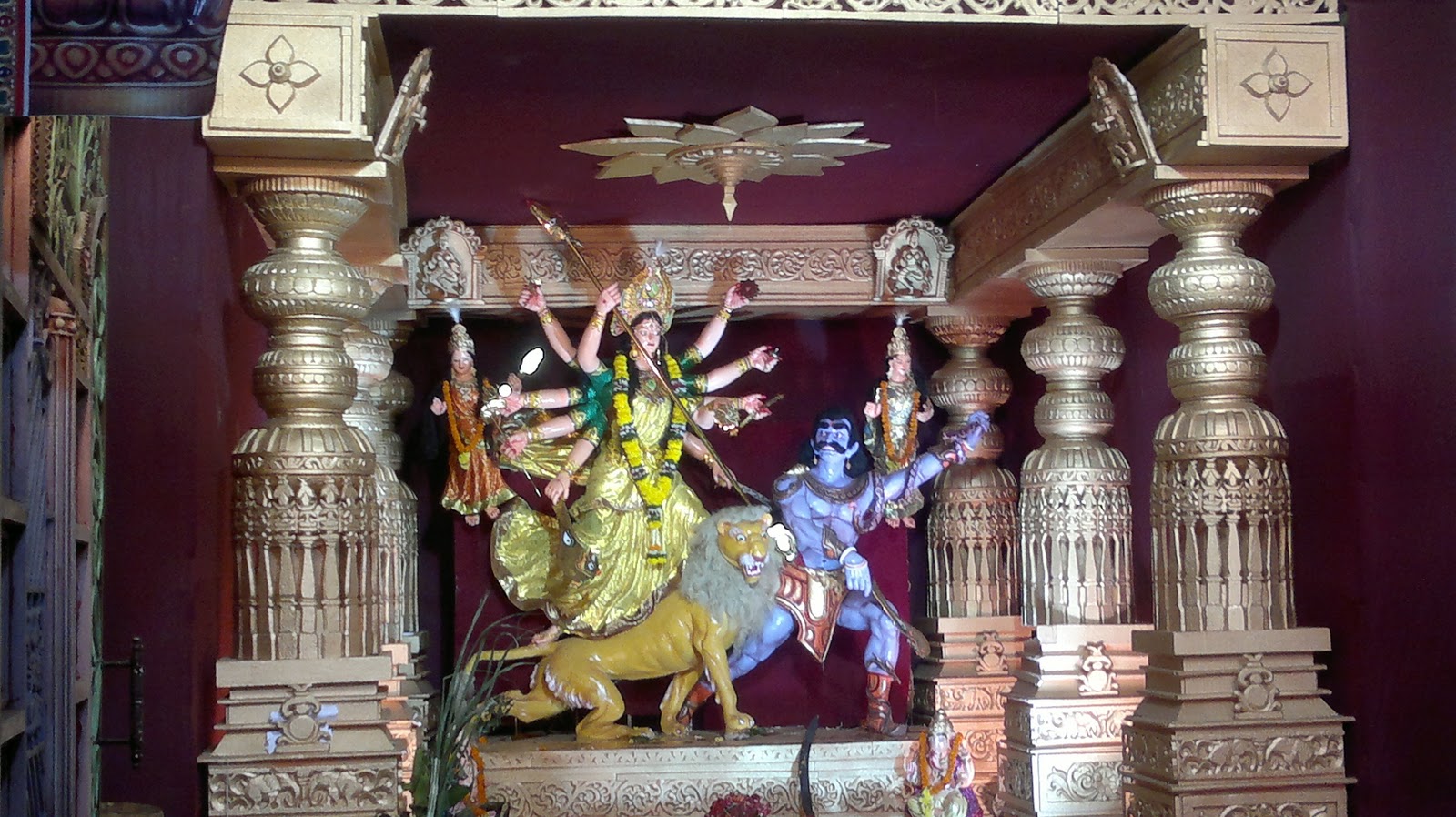 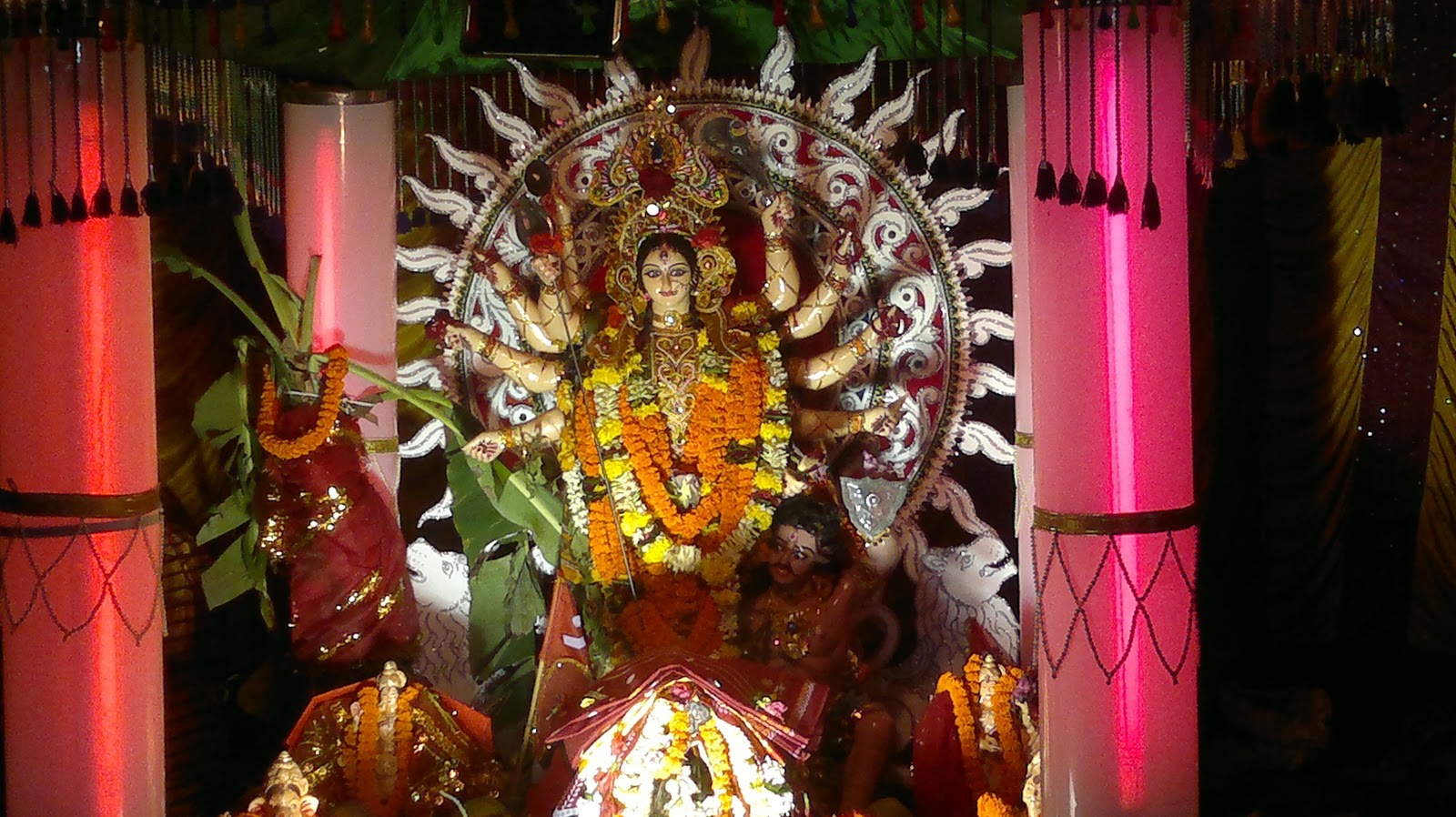 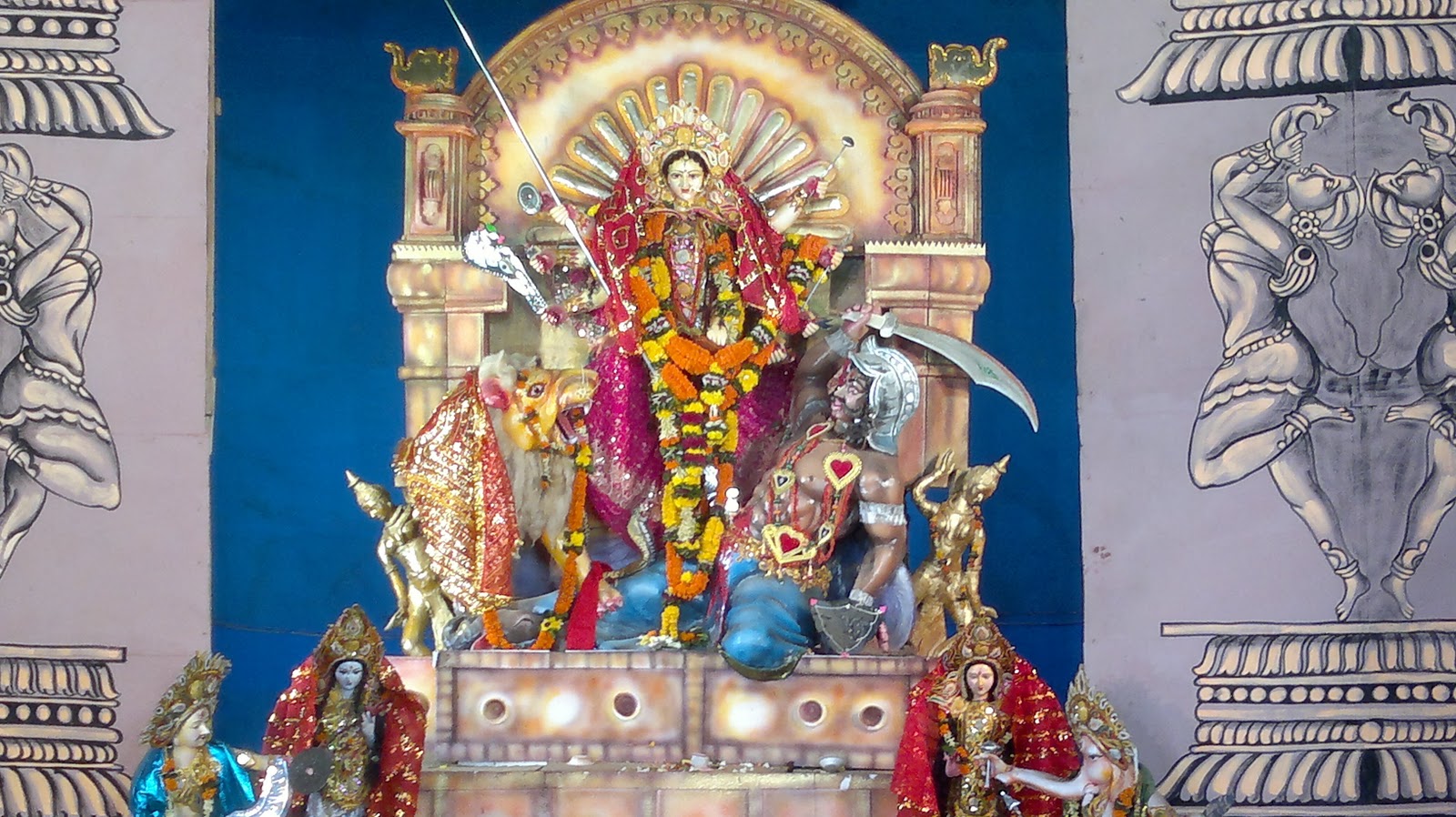 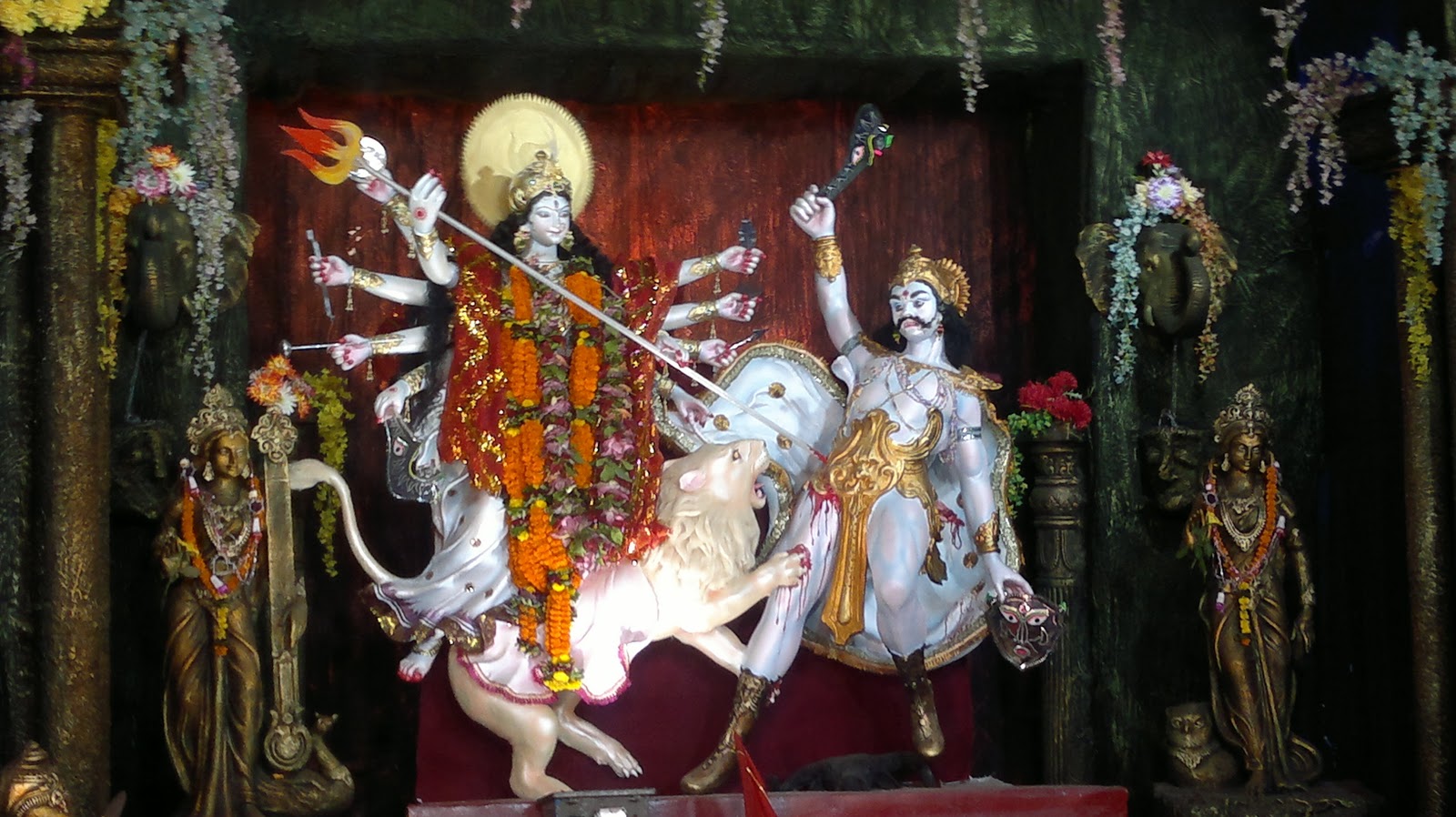 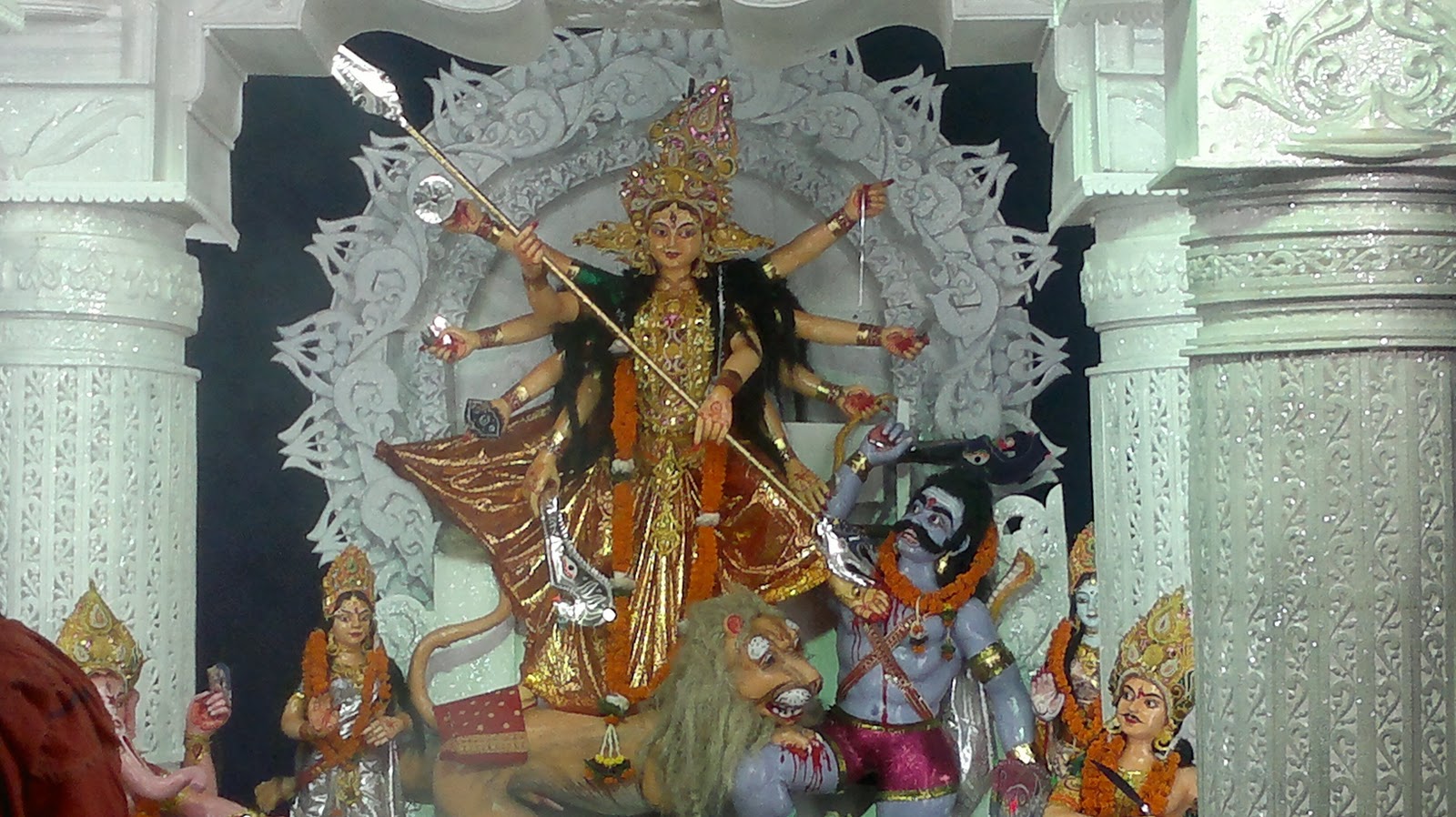 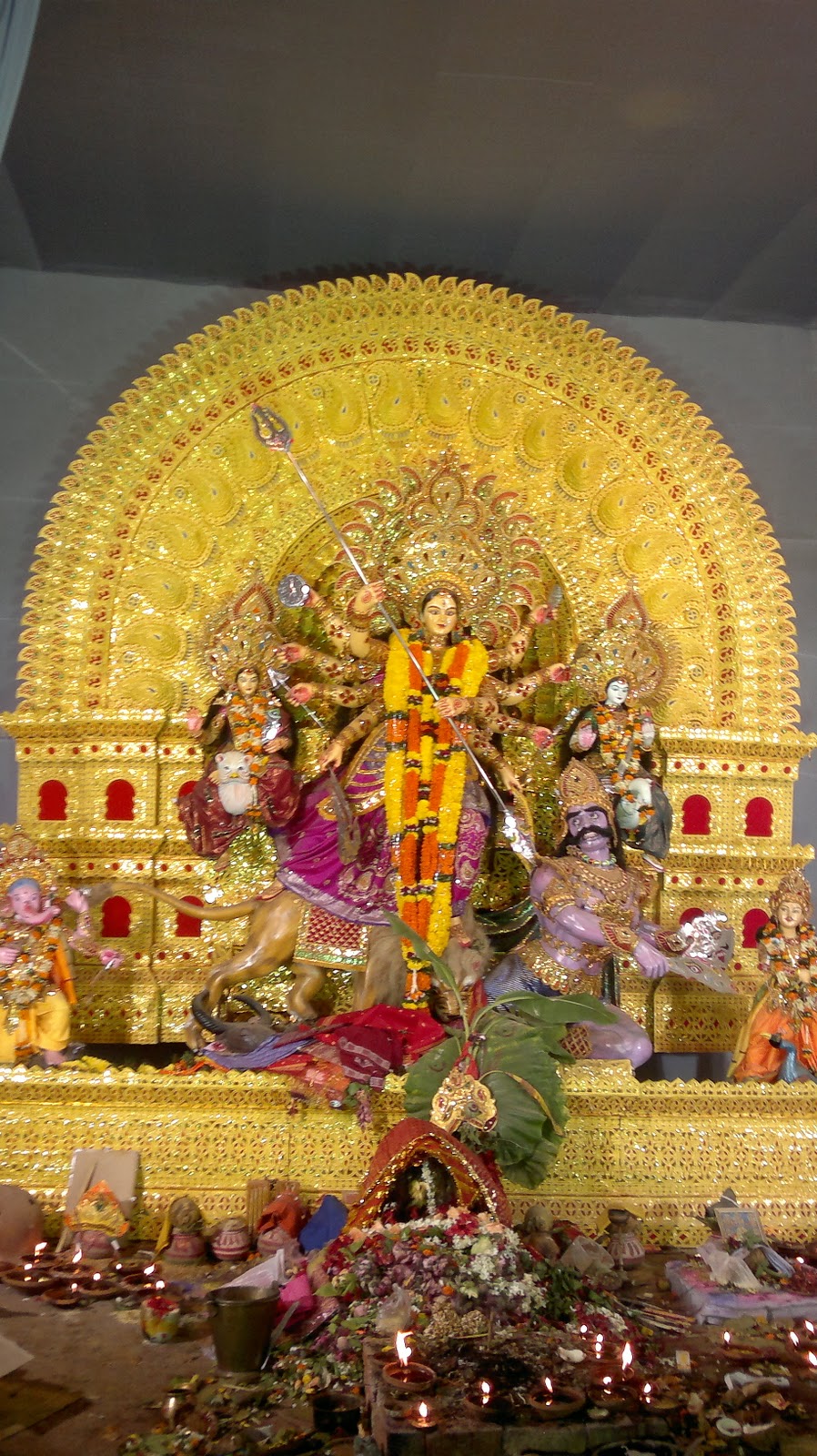 But the only thing that hurts me the most is the animal sacrifice. There has been a trend of misconception and blind believes of slaughtering domestic animals before Goddess to appease her. People do offer this with wish on before hand and after that the wish is fulfilled they butcher these animals. Then they cook the flesh and eat it. There used to be man slaughtering process years ago but it has vanished. But the process of sacrificing animals still continues. Is there any mother in the world who is thirst of her children’s blood? This is totally against the nature. Like we human being, those animals are also her children.  Just because they are weak and dumb, they are been killed mercilessly.  According to the reports more than 10,000 animals are killed this year at different Devi shrines despite the strict administration and enforcement of laws.


One question always arise in my mind that if you actually wants to show your power and artifice then sacrifice a lion or an elephant or how about an anaconda or it would be better if a dinosaur could be caught. Just one of them is enough to feed the whole town. Just because they are wild and can tear the human apart, those weak domestic animals like cows, goats, hen, cocks are dragged off. Not fair!!!
If you actually wants to sacrifice something then sacrifice your greed- adore her with love- appease her with hard work and sincerity.  That’s all she needs. Killing somebody will only make her angry. Yes, She is thirsty; but thirsty of evils. She has come here to stand the good and rumble down the evil growing everywhere.
WAKE UP! WAKE UP! This is not the devotion. Look at those eyes. She is crying; crying to stop all these violence. Stop before her temper is aroused and she starts the series of destruction.

P.S: My heartily and cordial thanks to my friend Rakesh who gave me such beautiful photos. Thanks a lot. :D
Posted by Namrata at 4:45 PM 2 comments: