Again the devil has appeared on the screen. Why go scripted so many scenes with him. For some unknown reason he had garnered a resentful place in my mind; not even in heart. I couldn’t somehow even put him into the atleast-I-like-them list. Though I believe it is never going to affect him in any manner.

Preeti narrated him whole thing and yielded a good laugh from him.

“Are you finished Preeti?” I asked her unenthusiastically.

“Look! how she is going paranoid.” Preeti leaned a bit to Maddy and spoke near him.

“You have done a great job Preeti. Thumbs up.”

“Why not Coca-cola?” I poorly joked. Even my jokes did rot badly in his presence.
“Okay Rockstar, See you later.” Preeti was to bid bye but then again she paused there. “By the way which section you are in? I suppose you are into junior year.

“Of course. I’m into your section.”

“Our section?” Again I could feel stars popping up around Preeti like popcorns.

“But you were not in the class.”

“Yeah. I just had some work. I’ll attend it from tomorrow.”

“That’s fantastic. See you later then.”

We walked past him. then again Maddy stopped us.

“Hey Preeti I needed some help of yours.”

“I will be in the bus. You finish your work and come.” It was going unbearable for me. I didn’t wait there any more and stomped out of there.

Preeti rushed behind me after a minute. “Calm down dear.”

I didn’t speak to her.

“Seriously?” I narrowed down my eyes on her.

“Of course. And I gave her the notes.”

“I don’t care. The only thing I know is that I can’t bear even the slightest glimpse of him.”

“I don’t know. It may be because he has long hair like wild animals.”

“What to do with someone’s hairstyle?”

“And he has got no care towards others emotion.”

“Now you are being unjustified. You remember how he came back stage to check our well-being and offered us a ride home too. He is a gentleman sloughed in a rough rockstar exterior.”

“Yeah. And your gentlemen do kiss you in the first meeting too.” I fumed.

“Okay. Leave it. Sometimes you are just impossible.” We resumed our marching to the bus.

The next we had practical classes in the afternoon section. I hurried with Preeti. She was in my group. I never liked Chemistry. Oh God! No matter how many times I rant about it, it can never equalize the much I loathe it.

I helplessly left the whole core of concocting blue liquids with brown and stirring with fried white crystals. I engaged myself in writing the practical notes.

Everytime teacher crossed our table; I would cunningly swift to Preeti and pretend of helping her.

Then all of sudden Preeti winced her face to a wry expression.

“I don’t know. I just can’t stand here anymore. We need to go out.”

“What?” I quizzically looked at her for a sane answer. How could I leave the lab in middle?

She then crouched on her heels holding stomach tight in her hands and started to wail. The lab assistant ran towards us. I bent down holding her and started to palpate her back. I didn’t know all of sudden what entered into her stomach that’s churning out so much pain in her.

“Ahh! I can’t bear it anymore. It’s killing me.” She looked at me from behind of those droopy eyes.

The lab assistant cut me in middle. “Yeah. You are right. Take her to the rest room. And ask Suchitra maam. She will give some medicine.”

He then helped me to bring Preeti on heels and we walked out prudently from the lab. She limped with me till the turn from where the colossal pillar obstructed the view to lab.

She then waited for a moment, grabbed my hand and scooted to the west. We pelted down the staircase that led to the backyard of college. She didn’t stop till we footed to a abandoned place. It was a deserted land since the new auditorium project has been stopped due to some scam.

Sun kindled high on the sky, more verve than usual blinding sights. There was only half an hour left for the lab to over and after that the bus would leave the college.

Preeti looked her and right to nothing and started to sprint again. She continued running with me through the unfinished building till we were at the end of it. Right then I marked something distinct. The place was tampered, quiet and dark. The subdued air blew bore an unmistakably essence that filled in our souls. Far from where we stood, a room like place was gloaming with lights.

As far as I remember from my last visit, the place was only walled from four sides with large windows, grand pillars and cracked roof. There were no rooms. Then when all these changed? And why Preeti has brought me to here?

Preeti yanked me in that direction of faint light.

“What is this, Preeti?” I freed my wrist from her grip. “Why have you brought me here? And what was that in the lab? You seem fine now.”

“Oh! Ava. Stop questioning and come with me.”

“You just come with me and answer will come to you automatically.”

She tried to get me again but I stood firm. She then fled to my back and pushed me hard from the gruff pose.

“No. Preeti. At first answer me.” She didn’t listen to me and kept pushing me towards the room.

A figure was standing before with his back to us under a orange flame that hardly laminated the statue. Then she made me stand at place and left me alone. It was darker and I could hardly see anything. The things got sensible when I heard the lines.

I instantly recognised the voice and also the song. It was justin bieber’s new charting single that had topped billboard. And voice was the one who topped in our college last week. He sang it brilliantly as usual but what made me laugh is not the song but the new avatar of Maddy.

He had his long mane cropped mess but swanky spikes. He was wearing a deep red button down shirt, no jackets this time and a pair of plain black jeans. He looked irresistibly handsome.

With a flicker the whole place flooded with bright light. I looked around in surprise at the arrangement. The whole place was groomed with candles, flowers, balloons, ribbons, shining fringes, curtains, fluffy toys. There was big photo mine was nailed before me. It was really big, actually the biggest of which I am framed in and I was carelessly smiling in it. And I felt somehow greasy on my heels when I moved. I looked down and found I was standing over a chromatic carpet. There laid fresh petals of different flowers aligned into a big round, not the monotonous red rose petals like they show in movies.

Then the funniest thing he did was as he turned to face us, he kept circling around me singing the song wiggling with his thick eyebrows and at end he took out a red rose from nowhere and gripping it with his lips, kneeled before me. At that time the only thing that I hoped that he had cauterized the stem well or else he was gonna get sore lips for hours from the sting of the thorns.

“You knew this?” Of course Preeti knew it and she was also with him in this plan. 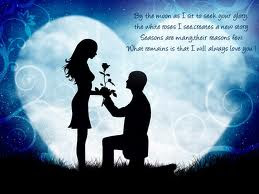 “That means you also tricked me.”

“I know that even thousand rose will faint in the glow of your smile, magic of your eyes, purity of your heart. So I brought just this one letting others to rot in garden just maintain the formality and to profess that, I love you, Ava.” His voice cracked through the hot air reverberating in the emptiness.

“There was no need of this one too. Anyhow it’s going to die here with your fake sweet words.” I snapped at him.

“Come on Ava. Now you are being rude. He did everything for you and you are grudging at him. Not fair.” She commented.

“So what else am I supposed to do? I can’t believe Preeti. I mean how can you say that? You know everything. Everything that I went through, everything that made me stand on my toes with madness and pain.”

“Yeah Ava. I know and that’s why I am doing this. Whatever happened then, it is past now and you need to move on. There were you living in a misunderstanding and here everything is clear. He is proposing you in bold, clear words.”

“I can do this before all if don’t like it.” Maddy interfered.

“Oh you! Will you kindly shut your mouth and keep your ass off.”

“Oops. You swear too.” He said in an amused tone.

I rumbled. “You didn’t do it fair Preeti. You are my best friend. I never expected it from you. Boys, they all are same. They only care to play with girl’s emotion.”

“And how many boys are there who can change themselves so that you will accept their proposal?”

“It’s just hairstyle. Not a big deal. You change it in every six month. So what?”
“I can be as you wish, leave everything you don’t like.” Maddy seriously remarked.
“See. Now this is called..” Preeti was paused with Maddy’s interference.

“It’s fine Preeti. No force to her. It’s totally your decision. If you don’t like me, just say it once and I will leave your path forever. Yes, I will. I give my words.” He took a pause before starting again. “But I can never forbid myself from loving you. I fell in love the very moment I saw you in crowd. And believe me it’s something that I never felt. It’s so goddamn heavenly pleasant.”

His voice shivered. I hope he wasn’t going to cry. He turned back to the wall where my photo. Tiny lights atop it kept blazing my face in it.

“Listen Dear. I know what happened to you, how you were deceived. But I would have not believed him if I hadn’t talked to him. He is so into you.” Preeti stood next to me.

She put a finger on my lips averting my words.

“No more words. Stop thinking that you are cursed. Stop rendering your life into hellish pain. Stop inflicting yourself. Right now love has ushered into your life. Welcome it.”

I didn’t know a part of mine was dying to believe it but then another part kept reminding about that grief-stricken period when I left alone in middle.