He shouted irritatingly counting money over his desk. “Make it fast. They are waiting.” It was Sunday and as usual he has estimated a three times more business on his shop. He looked at the crowd of customers around the small desk. Their eyes shone with greed and impatience. He counted in mind how much they are going to pay today, each individual and then again he summed them up. His face brightened up with the answer. Today I will get than tiny train set for my son, he thought to himself.

Just then the helper of his shop brought out the black plastic carry bag and handed to him before returning to his work.

“Here sir.” He held it with big smile. “Wait!” He interrupted suddenly before that carry bag was touched by the customer. He took out a small soiled white cloth behind his desk and wiped the small trail of blood on the carry bag. “Here sir, you chicken.” He brightly handed it to the eager customer.

The customer was very happy and in return awarded him the exact price without any bargain. The customer left and the next customer get to that place. He again shouted the same lines at the helper slaughtering hens back there. Just then the tiny phone over his desk rang loudly.

He picked up the cradle and replied. “Hello.”

From other side a broken female voice came. It was his wife and she was saying something unmanageable over the phone. “our son…so much..in hospital..alone…don’t know..what to do…please come soon.” The sentence was broken in places with inconsolable sobbing.

“What happened? Where is my son?” He cried over the phone. “Where are you now?”

He didn’t answer instead he left everything there, barged through the crowd to his bike. On the bike he raced to the hospital nearby his home. He was sure they must have taken his son to that hospital. That was the only piece of sensible thought he could think all the way. Except that all that came to his mind was the beautiful face of his son. He loved him too much. Perhaps he loved him the most in world. A scratch on his body was unbearable for him.

It took him half the time it usually takes. He blindly swerved through the traffic. The time he reached, everything was messed up in his mind. He didn’t know what to ask his son for. He bumbled through varieties of patients waiting on the tiny corridor of hospital. He even didn’t know what happened to his son. He ran past the wards and all of sudden stopped near the emergency ward. His wife was sitting there.

He went to them, shivering on his own gait with dread. His wife started to cry louder on seeing him.

“What happened to him?” He asked his wife. A nurse came and politely asked them to have both patience and silence as it’s a hospital.

“what the fuck happened, will you tell me?”

His wife managed herself to speak. “He was playing outside and I was cooking..and I heard his shout and came out and saw he had slipped from the terrace of unfinished building in the construction site. I had told him not to go there. I had even scolded him. But he again went to there and now..” Her tears rolled down again. 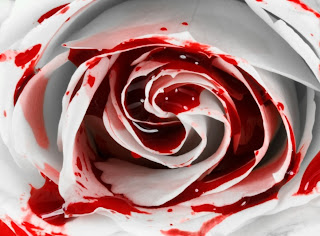 He went to the small bed where his boy was lying. There were bandages rolled over his forehead, a patch tapped over his cheek, covered his both legs and the left hand at different places. He was sleeping there.

He cried there, thinking crying would save him from comparing his child with those mere chickens but it didn’t too. He stood there alone, forgotten of the difference between the streak of blood he had wiped from the carry bag and the one he was witnessing now. There were now more similarities in them than just being equally red.
Posted by Namrata at 4:02 PM